The World Was Our Stage:

Spanning the Globe with ABC Sports 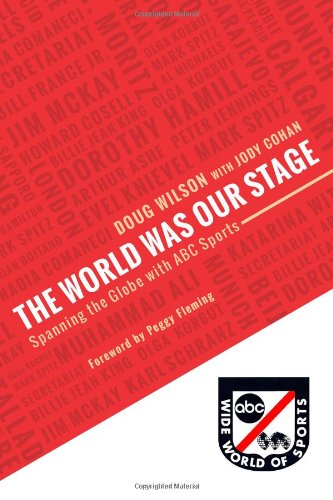 My long time friend and ABC Sports colleague, Doug Wilson, has written a wonderful book about his 50 year career with ABC Sports. In this fun and entertaining read, Doug uses his gift for storytelling not on the screen but on the page. As he takes us through the untold tales behind ABC’s Wide World of Sports, it’s hard not to feel nostalgic for those golden days of sports broadcasting. I enjoyed working with Doug and I was honored to write the foreword. I hope that you enjoy this book as much as I did!

Doug Wilson spanned the globe with ABC Sports for half a century. A 1957 graduate of Colgate University, he began his career in television as an NBC page in New York. He moved to ABC the following year. Starting at ABC’s Wide World of Sports as an associate director in 1963, Wilson covered 51 different sports across five continents at events ranging from figure skating in Beijing, to wrist-wrestling in Petaluma, to auto racing on the streets of Monaco, to Ping-Pong Diplomacy in Detroit.

Wilson also participated in the production of ten Olympic Games telecasts, beginning with Innsbruck, Austria in 1964. At the Calgary Games in 1988, he directed the world feed for the figure skating competition and the Closing Ceremony. In 1996, Canadian Television invited Wilson to direct the television coverage of the World Figure Skating Championships in Edmonton, Alberta. He became recognized world-wide as the premier director in figure skating.

Wilson won 17 Emmys and was honored by the Directors Guild of America in 1994 with its Lifetime Achievement Award in Sports. He was also honored by the Joseph P. Kennedy Foundation for his production of the 1979 International Special Olympics. In 1995, the United States Figure Skating Association presented Wilson with its Spirit of Giving Award, and he was inducted into the United States Figure Skating Hall of Fame in 2003.

Visit Doug’s website and order a copy of the book, here.